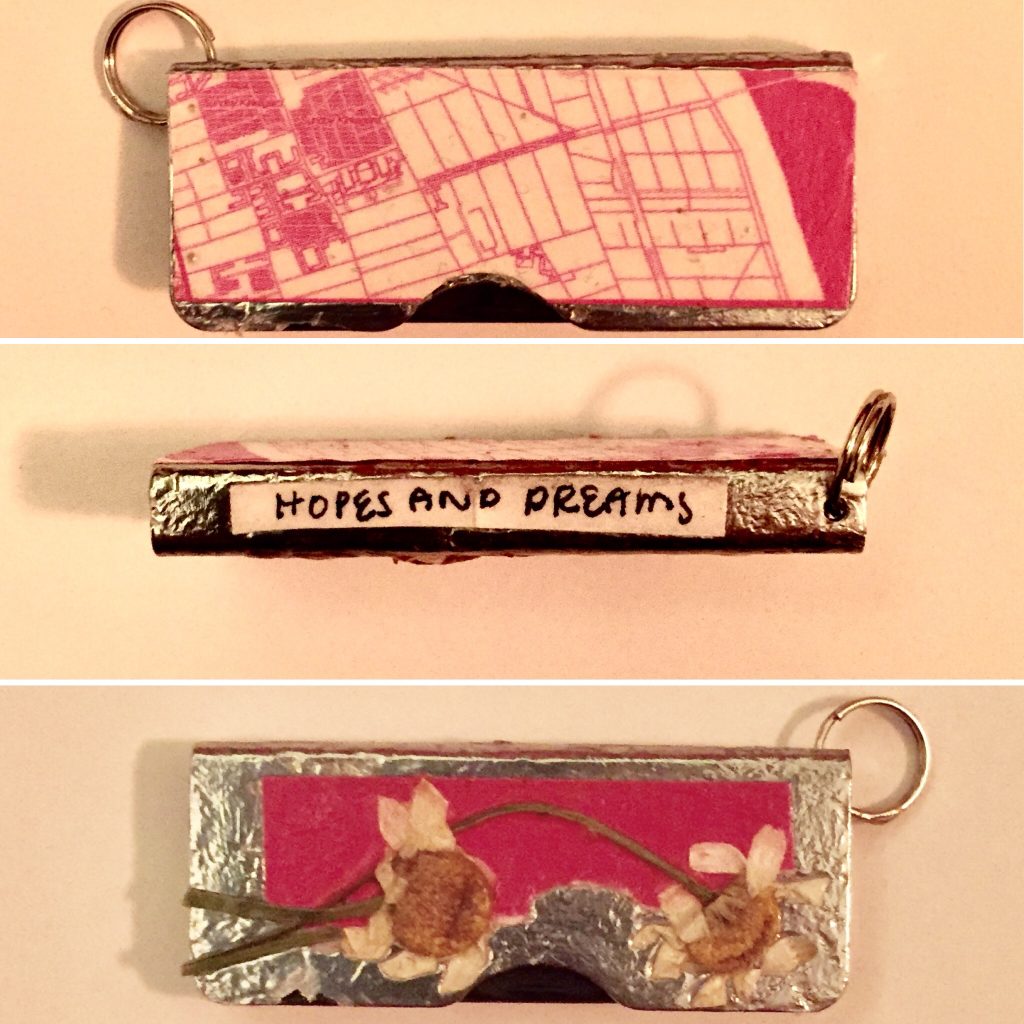 This collage is a tongue and cheek homage to making peace with one’s “hopes and dreams”. On the surface, it’s sweet – a technological object softly cloaked in dried flowers, small script, and a little bit of Copenhagen. But beneath the surface, it hides disillusionment. The USB is from [redacted], the preserved Valentine’s Day flowers from [redacted]. The object itself, a discarded piece of technology is quick, fragile, and disposable just like human beings in capitalism and love in today’s society. Theoretically useful, but incomplete, serving no function. Yet, by shrouding these found objects in the careful art of decoupaged nature; peace is restored, and power is reclaimed.

The USB itself contains the digital remnants of a collaborative piece with a bygone cutie that was never finished as the relationship dissolved. Concurrent to the start of </3, Hopes and Dreams I, has been sent on a restorative creative sabbatical in Palm Springs to an environmental art museum that teaches children about the Four R’s – Reduce, Reuse, Recycle, Responsibility.

🌗 Join us for an evening of poetry, spoken word, and other art forms as we welcome the midst of autumn. 🌗

⭐ ZACH GOLDBERG is a North Carolina-born writer, performer, and educator. A student of the Page Meets Stage movement, his work navigates issues of family, identity, and history. Zach’s manuscript “XV” was a finalist for the 2017 Bird’s Thumb chapbook prize and is forthcoming in one formor another. Catch him in in Oakland, where he lives with a motley crew of 13 adults and 2 toddlers, or San Francsico, where he works as a theatre arts administrator.

⭐ LISA PRADHAN is a Nepalese-American writer and multimedia artist. Lisa’s poetry explores themes of nostalgia, heartbreak and loss, delving into the anxieties and tensions underpinning moments of pause in life. Recently, Lisa collaborated with the Buddhist Peace Fellowship for its project on Asian-American Buddhists and has previously written and spoken at Smith College about Nepalese diasporic studies. Currently, Lisa is involved with KSW’s APAture Performance Art General Planning Committee and the API artist collective, Appendix.

⭐ MAYA SISNEROS is an Oakland-based writer whose poetry and fiction chronicle identity, alienation, and lines of f/light. Maya has performed for Quiet Lightning and Get Lit, and her non-existent chapbook’s been in the making since for-e-ver.

ABOUT THE LIVING ROOM:

PRESENT TENSE (previously known as “ABLESEA”) is a living room art/community space located on the border of Oakland and Berkeley. Established in the fall of 2016, the space has featured local Bay Area artists in exhibitions related to the topics of ‘Resistence’ and ‘Progress’.

ACCESSBILITY
The apartment is located on the third floor of a complex. Unfortunately, there is no elevator in this complex 🙁 This building admittedly has very poor accessibility.

Buy your all access pass to APAture 2017 today! apature2017.eventbrite.com

Because one showcase isn’t enough! Be sure to save the date for our other APAture events! 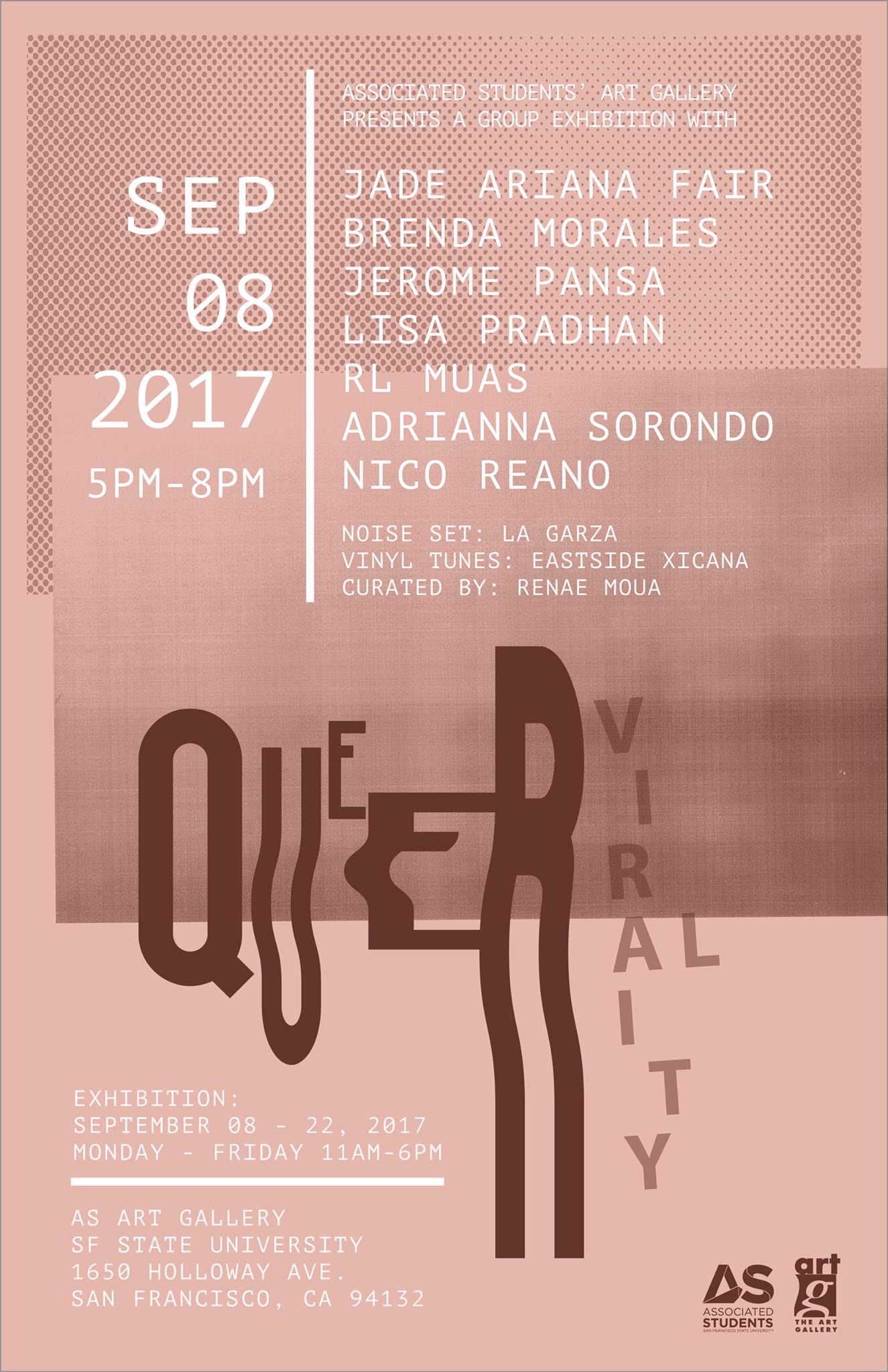 Drawing from digital culture movements and resistance practices, Queer Virality centers queer womxn, femmes and gender nonconforming artists of color, and the ways in which they heal, resist, create space, and transcend the realms of opposition. In naming queer into the viral, the mainstream, this multimedia exhibit proposes critical interventions into the binary logics of race, gender, sexuality, and more broadly, the social confines of our known reality.

In collaboration with the AS Art Gallery Team

Hyphen-Americans face the experience of becoming ambassadors for the other as soon as they can utter words. With that comes the tremendous power to craft and construct “the other” however they choose fit. This performance piece calls attention to the novelty of the hyphen experience by inviting the audience into an intimate encounter with the performer. As “the Nepali”, the performer invites the guest for biscuits tea and conversation of the audience member’s choice. 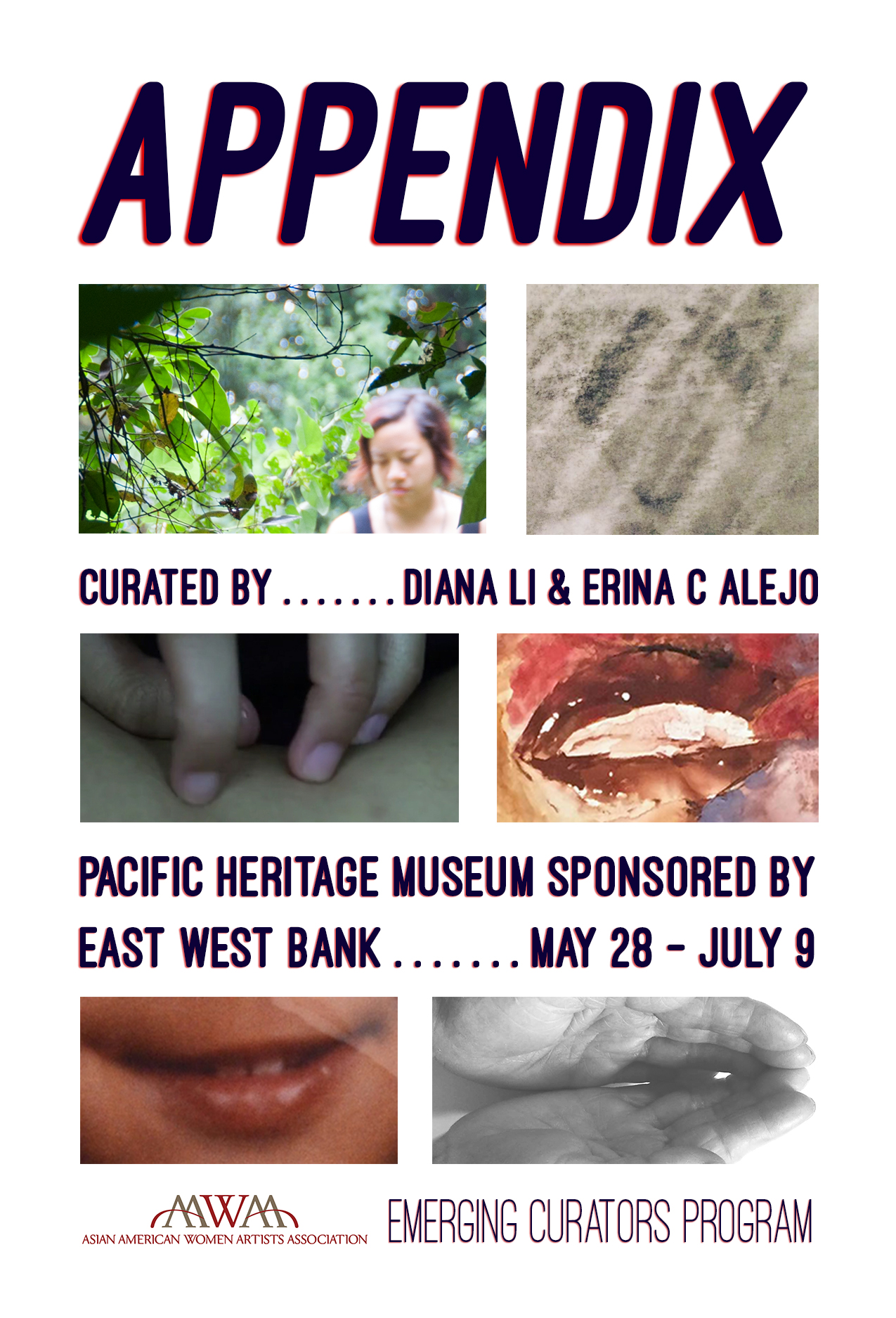 In lucid moments of stress or pain, the appendix is an organ whose unread cultural histories push their way into significance, carrying weight on an overlooked past, present and future. Showcasing work from ten emerging Asian American women and queer artists, the exhibition activates personal and intimate narratives of mental and historical trauma, while bravely reclaiming and empowering intergenerational memories as part of the world we live in today.

The 2015 earthquake in Nepal had devastating effects on Nepalese lives. The most horrifying toll is the thousands killed and injured. Families still left homeless and without medical care, still awaiting the impact of humanitarian aid. The quieter changes are the toppled temples and destroyed buildings that turned Kathmandu to ruble. In the aftermath, the Nepalese economy, once heavily supported by tourism, faces the slow arduous process of rebuilding. Once bustling streets are now silent, leaving only gestures of the past behind.

Thamel Rati (2016), recreates the dissipating night in the heart of Kathmandu pre-earthquake. Known more for curios – Kukris, singing bowls, violin sellers, and thumbed through paperbacks – than kin, Thamel Rati explores the intimate shifts of urban space from within the gullies. Families fragment, seized land trusts are turned into business complexes, and transgenerational traditions are remade as the district of Thamel continues to urbanize. Iterating this nocturnal soundscape, Thamel is a decontextualized lullaby to memory.

The Foucault Madness Collective, in collaboration with CSUSM graduate students, the campus LGBTQA Club, and the ASI Community Centers, is pleased to announce the interdisciplinary conference: Resisting Force and Discourse

Inspired by the work of Michel Foucault, this conference uses Foucault’s models of power as a framework to explore subjugation across institutions and everyday discourse.

Graduate students, advance undergraduates, and professors from the regional area and elsewhere are welcome to submit abstracts and present their work. This kind of organization is in line with the conference goals to promote new knowledge, and foster a community of scholars, while maintaining the high standards of sophisticated academic work.

The conference includes: an opening performance, breakout sessions, a keynote panel, and a closing reception.

Refreshments and lunch will be provided for registered participants.
You can register at:
http://foucaultmadness.wordpress.com/

This conference is FREE and open to the public.

Questions the conference is concerned with include, but are not limited to the following:

– How is the policing and norming of marginalized bodies represented in literature and film? Or, newer cultural mediums, such as MMORGs and internet spaces?

– How do state regimes of punishment similarly besiege parolees and racial minorities?

– Does the U.S immigration system constitute a branch of biopolitical administration?

– How is the human body a political site (i.e., hunger strikes, self-branding, gender bending, trans politics)?
What is the function of the citizen “Other”?

– How do juridical and normative systems produce catastrophic violence that no one seems responsible for?

– Do social norms challenge the viability of HIV+ persons as subjects proper, leaving only a dangerous corporality?

– Which social norms are challenged through the undocuqueer identity marker and movement?

– Where do we find alternative networks, spaces, and autonomous zones? How are they constituted (i.e., spaces of reprieve and crisis heterotopias)?

For a full description of the conference theme see the call for papers:
http://foucaultmadness.wordpress.com/call-for-papers-5/

For any questions or comments you can reach us at:
foucault.madness@gmail.com Jairo Leon is a Literature and Writing major entering his last year at California State University San Marcos (CSUSM). Besides a full time student, he works at CSUSM’s LGBTQA Pride Center where he organizes the Lectures of Human Flourishing, and facilitates discussion groups, such as the Solidarity Sessions. A founding member of the Foucault Madness Collective, Jairo values collaborative knowledge production, and taking scholarship beyond the university. He is slightly nervous about applying to Phd programs this fall, but is far more excited. Rainer Maria Rilke and Xavier Villaurrutia are his favorite poets April Cunningham is the Instruction/Information Literacy Librarian at Palomar College. She works with students as they build their habits of thinking critically about information. She’s also a drummer. Her interest in critical theory led her to join the Foucault Madness reading group. Lisa Pradhan is a recent graduate of Smith College where she received her bachelors in Psychology and Religion, with a concentration in Buddhist Studies. She also completed the equivalency of a minor in Studio Art and the Buddhist Studies Certificate from the Five College Consortium. She is currently working on editing a social work book chapter, and has another article on couples conflict patterns in publication.